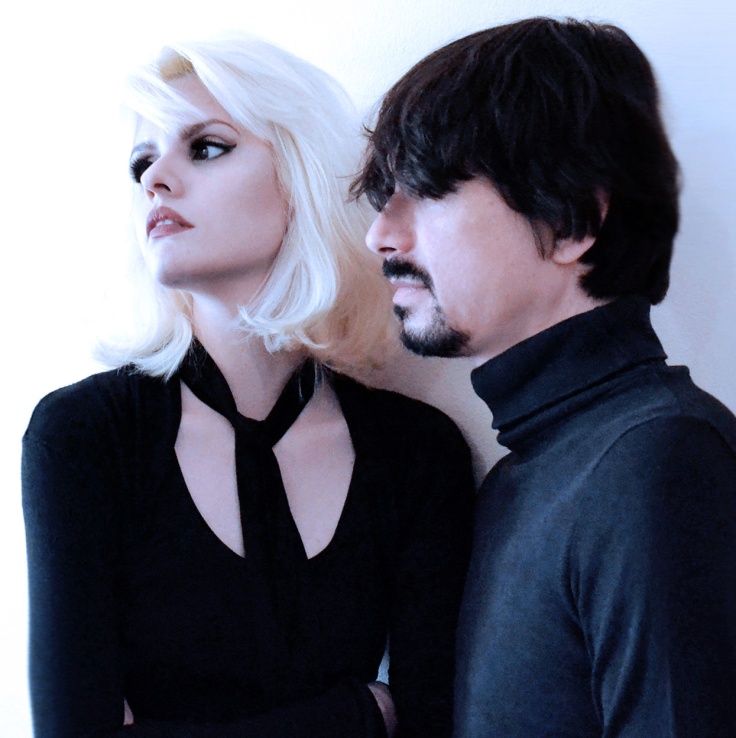 After playing in so many projects on the last 25 years, Martha F. and Hudson from Rio de Janeiro felt that something was still missing. They teamed up to form The Lautreamonts. The duo then dived into lots of experimentation and the result was a sound full of percussion, odd tempos, exotic instruments and influences that go from Post-punk to Middle-eastern music.

They have just released their debut EP, Who are you wearing. Tomatrax caught up with the band to talk about their music.

How did the band form?
After playing in so many projects before, we wanted to reinvent ourselves and the way we make our music. There were lots of gaps that we wanted to fill in and a couple of years of not being in a band, we started to talk about this new project.
Then, we were chatting about how Martha’s previous band (punk/new wave act Set-Setters), started with the idea of making a cover version of Marilyn Monroe’s “Diamonds are Girls Best Friends”. The band was active for 5 years, but they never got to play that song.
So, we said we were finally doing the cover as a new project with just the two of us. As with the other band, the music developed, we’ve released this EP and the MM cover never saw the light of day! haha

Where did the name The Lautreamonts come from?
Do you remember the band that did the opening for Friends tv series? They were called “The Rembrandts”. I always thought it was a fun name. Then, when we were looking for name ideas for this band, we came with the name of Lautreamont, that was a writer we were a lot into by that time. Then we took the same idea of that band and put it The Lautreamonts.

You’ve just released your debut EP, how does it feel to have it out?
Totally relieved! Even though this is a short album, it took a real while to be done. This band started just as a playground of ideas where we were creating and experimenting things. There were a lot of trial and error until we finally get into what we thought it was our “music aesthetics”. Then, there was a lot refinement during the recording phase and a lot of working on the mixing. But now, we’re really happy and proud of it! And it seems that people are enjoying it as well. 🙂

The EP mixes influences ranging from Middle-eastern and Indian music to Post-punk, Post-rock, Dreampop/Shoegaze, and psychedelia is it hard to get the various sounds to work together?
Well, during the creative process, that wasn’t the most difficult thing. I think most of those elements were inserted naturally on the music. It was more a work creating a unity among the songs so it was perceived as a whole album and not a collection of songs. What really took time to do was during the mixing stage. Because the music is so full of elements, layers and small details that it was pretty hard to come with a polished version, but in the end, we think we’ve managed to do that.

You said that after playing in various projects over the last 25 years, something was still missing. Do you feel like you’ve found what was missing in this release?
I think so. As we’ve said earlier, there were some gaps that we had in other bands that we wanted to fill in now. First, we’d like to evolve our music, take a step further from the “1,2,3,4” from punk rock or the aggressiveness of metal. So, we took all of our other influences (that you’ve mentioned on the other question), put in a blender and got this result. Also, we needed songs that would fit better the softness of my vocals, instead of having to scream over 2 loud guitars, bass and drums. This music makes it easier to sing, control and make different things than with a punk band.
Another thing was that when you’re in a band with, say 3-4 other people, you have to deal with all this different egos, perspectives and goals. When you reduce it to only 2 persons, things are much easier to resolve.
And in that way, we wanted autonomy to guarantee the quality of the music in a live situation (something that we’ve never could control before). With this band and the technology that is available now, we have our own portable equipment that is tuned to our own needs, so we can create a more interesting either sonically but also visually, since we’re also bringing our video and light projection.

What was the inspiration behind the animated “button” video for The Adequacy Waltz?
We were looking for images to illustrate our lyric video we’ve got lucky enough to stumble upon this amazing video by a German videomaker called Linda Klotzbach. The title of the movie is “Auf Knopdruck”, which can be translated as something like “Pressing (or clicking) a button”, which made perfect sense to us since one of the chorus lines of our song is “Just one click away”.
Then, there was the plot of the film, which was totally in line with the meaning of our song, that is about the need for social acceptance, and an idealized model of behavior. It was a very happy finding!

What inspired you to cover Black Sabbath’s self-titled track?
We were watching a Black Sabbath concert on TV and we talked how good and “evil” that song was. It was a time when we were still working on the songs and we were searching for a cover to do. It seemed quite natural since metal is in both our backgrounds.
So, during the production, we had the idea of changing the lyrics so it would be sung by the victim’s perspective, not the devil himself. Do you know the Type O Negative’s version for this song? Peter Steele also changed it a bit to make it look like he was the devil. It was a fun to do this “answer”!

Given you’re from Brazil, why do you sing in English?
There’s a couple of reasons for that. First, we’d say that 99% of the “rock” bands we listen to, sing in English (be they native speakers or not), so after all this years listening to this music, it just feels natural to sing and listen to music in that language. Whenever we hear a rock song that’s in Portuguese, it feels kinda weird to us.
Which leads us to the next point. This strange thing we perceive when we listen to a rock song in Portuguese drives most of our attention to the lyrics. And when that happens, we not only pay less attention to the music, but get influenced by how bad or good the lyric is. There are numberless of good music that are ruined by a bad lyric.
So, for us, music is always in the first place, vocals being just another instrument along with everyone else. We don’t want vocals to deviate our perception from a good song.

What is the music scene like in Rio De Janeiro?
Seems that it’s getting into a pretty nice moment right now. There are lots of small indie places here. It seems to have a “scene” and a place for everyone now. There are places where you will always find something more in an experimental vein. There are places to shoegaze/alternative stuff. Punk and metal always have their space as well. Plus, there’s a very cool venue that’s ran by girls with a feminist ideology behind, which is very inclusive. They actually released our EP through their label.

Do you ever listen to your own music?
All the time! 😛
And not on some indulgent way.. There’s a lot of listening during the production process of course. But then, after all is done, if we’re happy with the result (which in this case we definitely are), we’ll listen to it as frequently as another band that we like. Because, after all, the effort we’ve put on those songs were exactly to make it sound like a band we’d be fans of.

What other music do you listen to?
There’s a lot of good stuff out there and we’re noticing that slowly that some new bands are bringing back the “danger” and “abrasiveness” that the bands we used to love had.
But, we also have our all time favourites, which are: Martha: The Clash, Richard Hell & The Voidoids, New Model Army, Siouxsie & The Banshees and The Adicts Hudson: Foetus, the whole Mr. Bungle/Faith no More/Secret Chiefs 3 combo, Neurosis and lots of movie soundtracks, world music compilations and some extreme metal.
Also, there the main influences for this band besides the ones above, like Elysian Fields, Dead Can Dance, Einsturzende Neubauten and Xiu Xiu to name a few.

Now that your EP is out what do you plan on doing next?
We’re finishing the remix of the songs on the EP. Since we’re playing live as a duo, there was no way we’d be able to replicate that alive. Because of that, we’re changing the arrangements a bit so it will sound more electronic live.
Also, we’re preparing the live show as an audio-visual experience. We’re programming a light show in sync with the music, there’ll video projections as well. We hope it will be pretty cool!

Check out The Lautreamonts’s website to find out more!

2 thoughts on “Interview with The Lautreamonts”