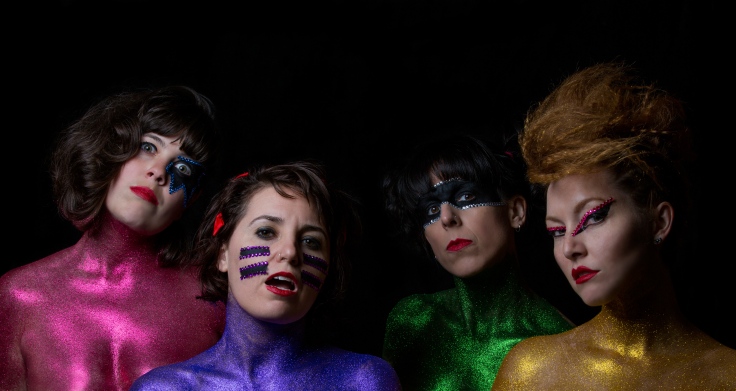 Glitoris are a four piece female outfit from Canberra who play their own brand of raw and roaring punk rock! They have just released their debut EP, the Disgrace EP, and are about to play gigs around Australia in its support. Tomatrax slides a piece of paper with questions on it under a door and had it returned with the following responses!

How did the band form?
We formed for a “one off show” at You Are Here Festival 2014.

Where did the name Glitoris come from?
Our collective vagina

You’ve just released your first EP, what’s it like to have it out?
Let’s just say we’re doing a lot of manspreading and enjoying breezy upflow.

What made you pick ‘Disgrace’ as your debut single?
Lyrically it represents the band and the struggles that we face as women that don’t conform to societal norms. It also represents the unique lexicon of words preserved for judging, criticising and putting women back in their place.

The EP captures the energy of a live show, was this hard to achieve?
No. The whole thing was recorded to analogue tape run really hot. It rocks hard, we performed it live, it has very few overdubs. Duncan Lowe at Infidel Studios was great to work with and really helped us to capture our live punk rock sound.

You’ve already received a fair amount of critical acclaim for your music, does this make you feel any pressure going forward?
No pressure. The Gliterati own this band, we’re super stoked for the positive feedback and are looking forward to recording our album next year.

You’ll be touring Australia at the end of the month, what can fans expect from your show?
A killer live show pumping out wet hot punk mayhem.

Do you ever listen to your own music?
It’s hard not to when rehearsing.

What other music do you listen to?
Everything from CRASS to Nina Simone to Joan Jett to Mr. Bungle to Midnight Oil. Pixies. Anything goes as long as it’s not Bedwetting Drivel.

What do you have planned after your upcoming tour?
Crimping. Screaming. Gyrating. Being an absolute fucking Disgrace.

Check out Glitoris’s Facebook page to find out more!